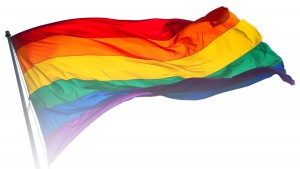 Since the 1970s advent of the LGB Rainbow Pride flag in San Francisco, several communities have felt the need for separate, in addition, flags to represent and gather their sub-communities under. These may be based upon sexuality, gender identity, sex identification, sex, gender and sexuality expression, role, or activity. 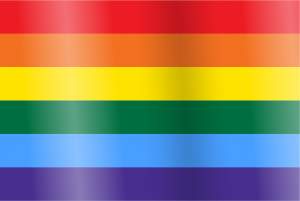 Originally designed by Gilbert Baker and first paraded in 1978 to rally the gay rights movement at Pride events in San Francisco.

The Rainbow flag is now considered to be LGBT+ inclusive, however, several groups within the gender and sexuality spectra have also flown their own identity flags, as below. 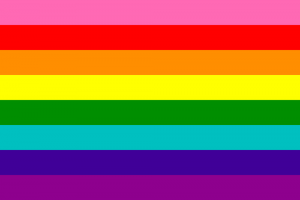 “After the assassination of gay San Francisco City Supervisor Harvey Milk on November 27, 1978, demand for the rainbow flag greatly increased. To meet demand, the Paramount Flag Company began selling a version of the flag using stock rainbow fabric with seven stripes using the colors red, orange, yellow, green, turquoise, blue, and violet. As Baker ramped up production of his version of the flag, he too dropped the hot pink stripe because of the unavailability of hot-pink fabric. San Francisco-based Paramount Flag Co. also began selling a surplus stock of Rainbow Girls flags from its retail store on the southwest corner of Polk and Post, at which Gilbert Baker was an employee. In 1979, the flag was modified again. The organizers of the 1979 San Francisco parade decided to split the flag into two in order to decorate the two sides of the parade route. To achieve this, they needed an even number of stripes, so the turquoise stripe was dropped, which resulted in a six stripe version of the flag — red, orange, yellow, green, blue, and violet.” – Wikipedia 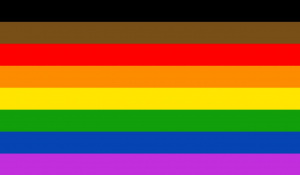 Introduced in Philadelphia in 2017 to counter racism in or towards queer communities, the Black and Brown stripes represent people of colour and were part of a More Color More Pride campaign. Others have disputed the need for their inclusion. 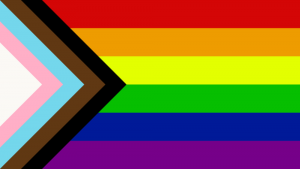 Black, Brown and Trans Progress Rainbow Pride Flag created by Daniel Quasar in 2018. Quasar has incorporated people of colour, those living with AIDS (and those that have died) and the Transgender flag as a forward progress inset arrowhead into the six-stripe Pride flag. The separation of the additional stripes he argues is “because of their difference in meaning, as well as to shift focus and emphasis to what is important in our current community climate.”

Designed by Michael Page in 1998 in order to give the bisexual community increased visibility. The colours are taken from the Pink and Blue biangles (triangles) and their intersection. The Purple band, like bisexual people, blends “unnoticeably into both the gay/lesbian and straight communities.”

Used since 2010 the Pansexual (also Omnisexual) flag portrays attraction to all gender identities and biological sexes.

Attraction to more than one sex/gender or gender identity. Polysexuals prefer the term over bisexual as that would suggest just two genders or attraction to only two whilst there may be more. Instead, they include the possibility of three or more genders and would class as poly anyone attracted to two or more genders, whilst pan would mean all genders.  Polysexuality embraces many, but not necessarily all, sexualities/genders.

Pink and Blue represent the traditional genders and Green covers third genders and those of fluid or no gender. 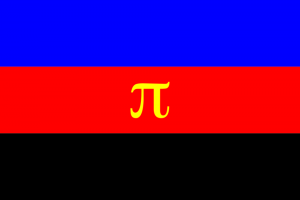 The loving of more than one person at once with honesty and consent (not the having of affairs, nor polygamy – marriage of one man to multiple women) – “consensual, ethical, and responsible non-monogamy”. Created in 1995 by Jim Evans.

The Pi symbol is the first letter of Polyamory in Greek and its Gold-yellow colour represents the “value that we place on the emotional attachment to others, be the relationship friendly or romantic in nature, as opposed to merely primarily physical relationships.” The Blue stripe represents “openness and honesty among all partners with which we conduct our multiple relationships; Red, representing love and passion; and Black, representing solidarity with those who, though they are open and honest with all participants of their relationships, must hide those relationships from the outside world due to societal pressures.”

Asexuality is a lack of sexual attraction or a low interest in sexual activity and may exist on a greysexual spectrum. Arousal may be present, low or absent, the emotional and/or physical desire is just not there. Whether by biology or psychology it is not the same as celibacy or abstinence – not having sex by choice. Sometimes called Aces, asexual people are pathologised by mental health paradigms that still suggest low interest in sex is “abnormal”, e.g., Hypoactive Sexual Desire Disorder (HSDD) or Inhibited Sexual Desire (ISD). Aces and greysexuals often still want relationships but without sex being a strong component or present at all. The Asexuality Visibility and Education Network (AVEN) prompted the creation of a flag in 2010 which was voted on and approved online. Allosexual is the opposite of Asexual. 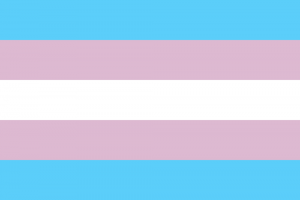 Pink and blue represent the traditional colours for baby boys and girls, repeated and reversed, whilst White covers intersex, neutrois, and/or other gender identities.

Being symmetrical, the flag is “correct” whichever way you hang it. For some trans people, GRS surgery was seen as “correcting” the feeling of being in the wrong gendered body. 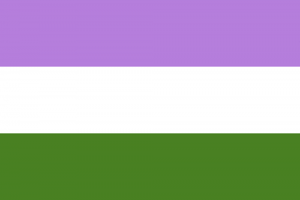 Created by Marilyn Roxie in 2010.
Lavender is meant to represent androgynes and androgyny and also the “queer” in genderqueer, as Lavender is a colour that has long been associated with “queerness” including gay, lesbian, and bisexual communities.
The Lavender purple colour is a mix of Blue and Pink and the Green is meant to be the colour opposite for those outside the binary, whilst the White represents no gender or gender neutrality. 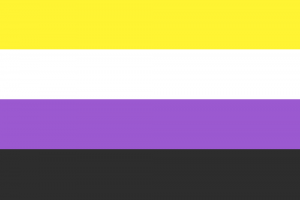 Created in 2014 by 17-year-old Kye Rowan as an alternative to the Genderqueer flag which not everyone felt they identified with.
Yellow is for gender without reference to the gender binary; White for those with many or all genders, as white light is all colours. Purple represents a mix of female Pink and male Blue, whilst Black is for those without gender, as Black is the absence of colour.
The flag was not intended to replace the GenderQueer flag of Marilyn Roxie but rather to supplement it and allow subtle nuanced difference between GenderQueer and Non-Binary labelling, though many use them interchangeably. 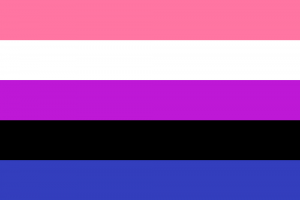 Genderfluidity is for people whose gender identity and/or expression is not fixed or constant. The flag was created by JJ Poole around 2013 or earlier.
The Pink represents femininity, white the lack of gender; Purple a combination of male and female; Black represents all genders including non-binary/third+ genders.

The Intersex flag was created by Organisation Intersex International (OII) Australia in 2013 as a symbol without gendered Pink and Blue colours.
OII describes Yellow and Purple as both “hermaphrodite” colours and the circle as “unbroken and unornamented, symbolising wholeness and completeness”.
Intersex people are still fighting for bodily autonomy and genital integrity, and this symbolises the right to be who and how we want to be. 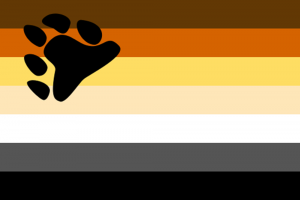 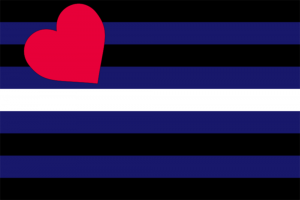 The flag’s creator wanted the interpretation of the colours to be open to interpretation. The following, however, are commonly held: Black is for leather, S/M, and for permanence; Blue is for denim, devotion, loyalty, and community; White is for safety, purity and innocence; and the Red heart is for the love of leather expression, respect, consent and understanding. 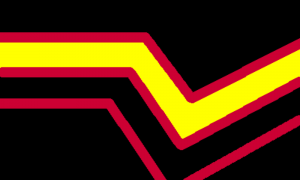 The Black represents “our lust for the look and feel for shiny black rubber.” The Red represents a “blood passion for rubber and rubbermen”; Yellow represents the “drive for intense rubber play and fantasies”, and the chevron is meant to represent kinkiness. 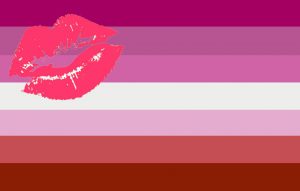 The flag was created in 2010 by This Lesbian Life blogger who was fed up of not being accepted as a lesbian as she was so femme.

The shades of red, purple, and pink are traditional feminine-associated colours – within the 20/21st centuries, at least. 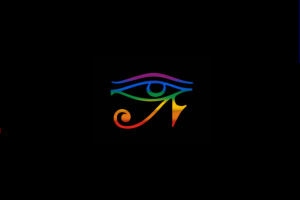 The Rainbow LGBT+ colours are placed behind the ancient Egyptian Eye of Horus symbol, one of several icons used by Goths. 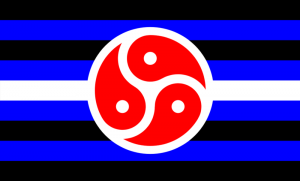 If you are interested in LGBTIQ+ talks eg for Pride, LGBT+ History Month, or D&I training then check out GenderAgenda.net and KatyJon.com/talks. Sample topics include Fifty Shades of Grey Sexuality, Around the World in 80 Genders, The Science of Sex and Gender, Non-Binary Gender in History & Making History Now, and many more. To discover more about individual varieties of how people express their gender check out Fifty Shades of Gender.